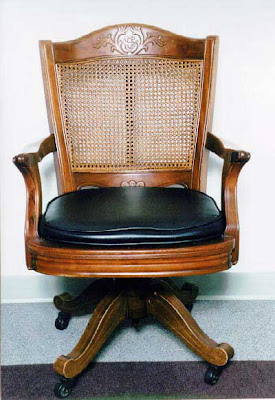 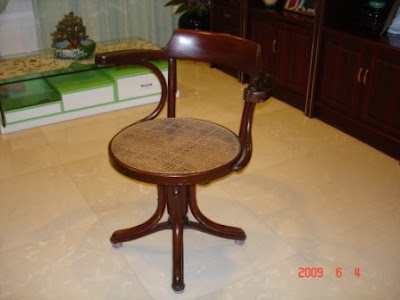 Have you wondered where/when the swivel chair actually originate? The chair you sit on when you go to the hairdressers or the office chair that swivels when you rise to manager's post?

I love the barber's  swivel chair  as I used to watch my cousin with his scissors and razors work on his customers. ...and out of one single chair and one single pair of scissors he could feed a family in the 1960's in Sibu..

Swivel chairs have been around since 1800 when Thomas Jefferson invented one to allow the poorly treated office workers of the time a bit more comfort whilst multitasking.

Today there are many different varieties of swivel chairs.

The one that is still kept in mint condition is the one belonging  to my Seventh Aunt in Sibu. Her mother in law (Towkay Neo Sia) sat on it for many years at the cashier's desk in Chop Ching Chiong (No.7 High Street Sibu). The chair was placed in an elevated compartment called an office with a small window...And she could see every customer who came in. She stacked up coins of different values on the table  - all systematically arranged for her to give the change when the shop assistants came to her with the payments. Her accounts were never wrong.

Chop Ching Chiong was a textile shop which sold some of the best materials in town in those days. They also provided useful articles like scissors and other needlework stuff. The first bra I ever saw was in this shop when I was about 6 years old. They were simply called "women's undergarments" and were unmentionabled. Women would bashfully go to the back of the shop and ask my aunt's young sister in law  to bring the bras to them discreetly. I believe they never tried them on at all as there was no fitting room in the shop.

I  also remember the grand lady as a real Towkay Neo who had a chain with lots of keys which ja ngled as she walked around. Her position was undisputed and she had a lot of authority about her.This lady boss also wore only Sam Foo. I had never seen her wearing anything else.

But to me as a young starry eyed girl..to be able to sit on an important looking chair like that she must be ultra rich and important and to be feared!!. And only a very great lady with power could sit on a chair like that!!

Later I saw many managers' chairs. But none was as beautiful as this one. Several years ago I made a visit and photographed it....?When I looked at it I still could imagine Grandmother Sia sitting on it and turning around to look at us. And we would shiver in our shoes (slippers). But actually she did have a very sweet smile.

(This post is especially for all my friends/relatives  who grew up in High Street of Sibu...)
at March 09, 2012

Email ThisBlogThis!Share to TwitterShare to FacebookShare to Pinterest
Labels: Sibu

Now I will tell you the story of my swivel chair. I haven't blog about it or planning to, but will after this comment.

Thank you for the chair.

The chair must be God's provision.

We went to west Auckland in Henderson to buy a washing machine. Next door was Warehouse Stationery. The husband suggestted we popped in for a look and I wasn't keen.

We bought two different swivel chairs that Sunday, not knowing they were advertised as special. The executive chair was cheaper by 60% and I couldn't believe it. So we bought and enjoyed swivelling on it.

On Monday, my husband read about the special which ended on Sunday. He rang the Henderson branch, and they would sell him at the discounted price. I was reluctant to drive miles and miles to a place I am not familiar as I tend to get lost. I rang the branch St Lukes nearer to us. They won't sell at the discounted rate but at the reverted old price.
I went to buy it, and decided if it was so much cheaper, I might as well buy two. On the way there, I was praying, God, since I am driving so far away, and caught in the traffic jam, you better make sure they will sell them to me at the discounted rate. They were good and sold them to me.

That's why we ended up with a spare chair. I said, we will sell it perhaps at a profit at Trade Me. On Wednesday, after ESOL class, I went to the Church office, something I haven't done for a long time.

The pastors were moving furniture for the new Chinese Pastor, Albert Ng. He needed a chair and I told them I have one. So I sold the chair to the church.

I was going to blog the store because they were selling recycle bags and giving half the proceeds to Salvation Army for poor students' stationery fund.

Thanks for inspiring me to do this topic. I wasn't even thinking about it.

Daniel..may be one day you can find it in an old antique shop in Singapore...This is really something from the 1930's or 40's Sibu..when lots of furniture came direct from Singapore by ship.

Ann...amazing tale!! God is looking out for everyone!!

Photo by Steve Ling. Sg. Kut. Note the wood panels to help reinforce bank of the canal The photo shows one side of the Kut Canal, the only m... 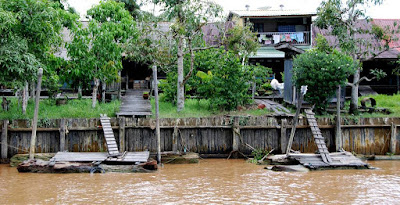