Hairdressing during the Japanese Time

Girls did not really keep long hair during the Japanese Occupation.

My mother and her sister had to cut their hair very short to look like boys. My maternal grandfather was a part time barber and he did most of the hair cutting for the families who lived around them. Mothers would bring their babies and little children for free hair cut. Perhaps that was how our eldest uncle Lau Pang Ping learned how to cut men;s hair and later he worked in a barber shop in sibu whenever there was nothing to do at the wharf after the war.

On the other hand, most young ladies liked to keep a bit of long hair.

But according to my cousin, Yew Ping, all of the girls in the family, including our younger aunts, had to sport short hair and the family barber was our second uncle Tiong Siew King.

He would all cut hair short, and above the ears!! The Foochows then called this hair cut Ngi Yang Geng. The height of the ears. No one dared to argue against him. He would clip their ears on purpose if they were rebellious.

The girls would call the styles coconut or mushroom hairstyle. It was still very clear to them that long hair meant elegance, but the men would have not allowed long hair for girls at all.

And I think my mother and her sister just hated girls  who had long hair throughout their lives. They associated long hair with witches. And long hair was also associated with lice.

Those who lived near Sibu had to cut their hair short and make their faces black by putting mud on their face as they went to do farm work.

Some became naturally dark or tanned when they worked under the sun. Some girls even cut their own hair very unevenly to look unsightly.

While those who did not want to do farm labourers' work, they got married and have a baby or two by the end of the Japanese Occupation when they were hardly 16 or 17 years old.

War time was definitely not a time for girls to think about beauty and hair care. They had to save their own lives and honour. 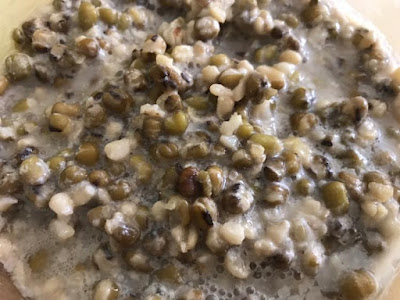